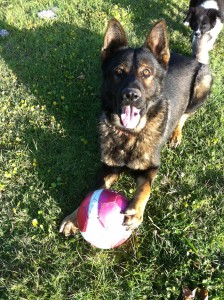 Sargent Playing with his Ball.

A Houston rescue organization refused to return an Iraqi war vet’s dog that he uses to help with the stress of multiple tours of combat duty. The Greater Houston German Shepherd Dog Club refused to return Sargent, a German Shepherd Dog, despite that his owner offered to pay all their expenses and even an adoption fee to get his own dog back. The rescue got the dog from an animal control facility that was over 25 miles away from where the dog got out. The dog somehow wound up in another county so was not found by his owner.

This same organization refused to return a college student’s family dog, Monte, that they had for 8 years since he was 8 weeks old. The rescue had the dog for a day and a half and the owners offered to pay all expenses but were refused.

Both dogs were returned to their rightful owners but suits had to be filed to get the dogs back. This organization is still trying to take Monte away from his family and has appealed the trial court’s decision.

Now this rescue is lobbying the City of Houston to change their law so that the City owns your dog if it is impounded by the city and you don’t reclaim it in 72 hours (no tag) or in 6 days (with a tag). You could be on a short vacation and return to find out your dog got out and you don’t own it anymore.

Section 6-102(b), the proposed ordinance, states that after the short hold period “title and sole ownership of the dog transfers to BARC, the dog becomes the sole property of BARC, and becomes subject to disposition as BARC deems appropriate.” This rescue and some others (not all rescue groups take this hardline approach) do not want to be inconvenienced if an owner shows up to claim his or her dog. But what better result could there be than to reunite dogs with owners who have desperately searched for them like the owners of Sargent and Monte? Returning dogs to their owners allows the rescue to save a dog that really needs saving. Two dogs are saved instead of one.

We have Constitutional rights in our property and the City is trying to take away our dogs without any due process. This is a harsh result for something that could happen to anyone. Dogs are family so please help prevent this callous law from passing.

The Houston City Council is voting on this issue on Wednesday, March 12, 2014 even though this is the first time this issue is on the Agenda and it’s not even set for discussion.

Please let the Houston City Council know that you OPPOSE SEC. 6-106b THAT WOULD ALLOW THE CITY TO TAKE AWAY YOUR DOG. Email and Fax on Tuesday (3/11) because the vote is on Wednesday! Thanks–Woof!

This entry was posted in Dog Law. Bookmark the permalink.